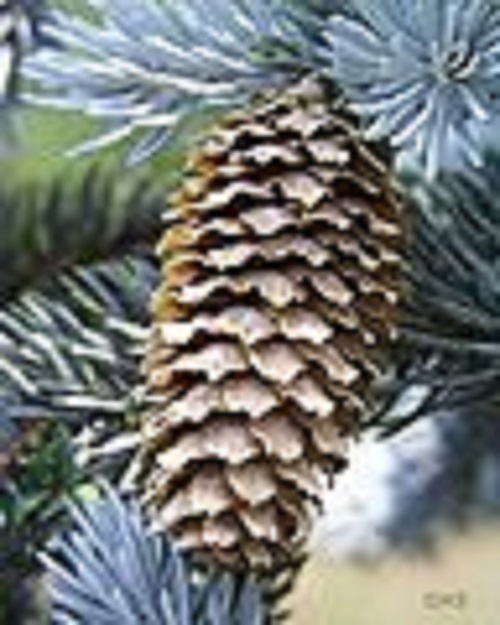 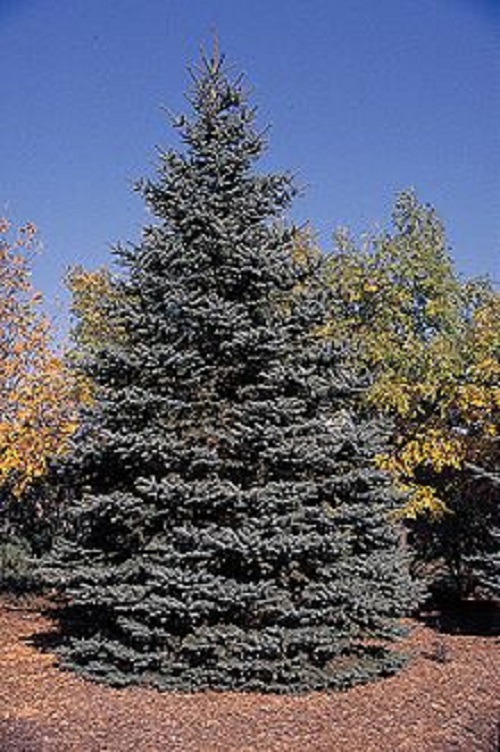 Colorado blue spruce, with the scientific name Picea pungens, is a species of spruce tree. It is native to the Rocky Mountains of the United States. Its natural range extends from Colorado to Wyoming but it has been widely introduced elsewhere and is used as an ornamental tree in many places far beyond its native range. The blue spruce has blue coloured needles and is a coniferous tree.

In the wild, Picea pungens grows to about 23 m (75 ft), but when planted in parks and gardens it seldom exceeds 15 m (49 ft) tall by 5 m (16 ft) wide. It is a columnar or conical evergreen conifer with densely growing horizontal branches. It has scaly grey bark on the trunk with yellowish-brown branches.

Requires Stratification Many plants produce seed that is viable but dormant. This means that while the seed has all the internal structures and nutrients required to germinate, the seed coat is so hard, water cannot pass through it and initiate germination. When seed is in this state, it is known as being dormant. Seed dormancy is a naturally selected for trait that protects the seed of many plants allowing them to safely overwinter and then be ready to sprout in more favourable conditions in spring.

The remedy to naturally breaking seed dormancy is typically the passing of time. In particular, seed overwintering outside and experiencing the natural freeze thaw cycles that occur in late fall, winter and early spring. To artificially break seed dormancy, sow the seed in a soil-less mix, water than chill in a refrigerator for a set period of time. This dormancy breaking process is called stratification.

Waxy grey-green leaves, up to 3 cm (1 in) long, are arranged radially on the shoots which curve upwards. The pale brown cones are up to 10 cm (4 in) long.

Picea pungens and its many cultivars are often grown as ornamental trees in gardens and parks.It is also grown for the Christmas tree industry.

The blue spruce is attacked by two species of Adelges, an aphid-like insect that causes galls to form. Nymphs of the pineapple gall adelgid form galls at the base of twigs which resemble miniature pineapples and those of the Cooley's spruce gall adelgid cause cone-shaped galls at the tips of branches. The larva of the spruce budworm eat the buds and growing shoots while the spruce needle miner hollows out the needles and makes them coalesce in a webbed mass. An elongated white scale insect, the pine needle scale feeds on the needles causing fluffy white patches on the twigs and aphids also suck sap from the needles and may cause them to fall and possibly dieback. Mites can also infest the blue spruce, especially in a dry summer, causing yellowing of the oldest needles. Another insect pest is the spruce beetle (Dendroctonus rufipennis) which bores under the bark. It often first attacks trees which have blown over by the wind and when the larvae mature two years afterwards, a major outbreak occurs and vast numbers of beetles attack nearby standing trees.

The blue spruce is susceptible to several needle casting diseases which cause the needles to turn yellow, mottled or brown before they fall off. Various rust diseases also affect the tree causing yellowing of the needles as well as needle fall. Canker caused by Cytospora attacks one of the lower branches first and progressively makes its way higher up the tree. The first symptom is the needles turning reddish-brown and falling off. Meanwhile, patches of white resin appear on the bark and the branch eventually dies.

The Navajo and Keres Native Americans used this tree as a traditional medicinal plant and a ceremonial item, and twigs are given as gifts to bring good fortune. In traditional medicine, an infusion of the needles is used to treat colds and settle the stomach. This liquid is also used externally for rheumatic pains. Early people used their wood for building

If you order more than one of these seeds packs they will be put all in the same pack unless otherwise requested.